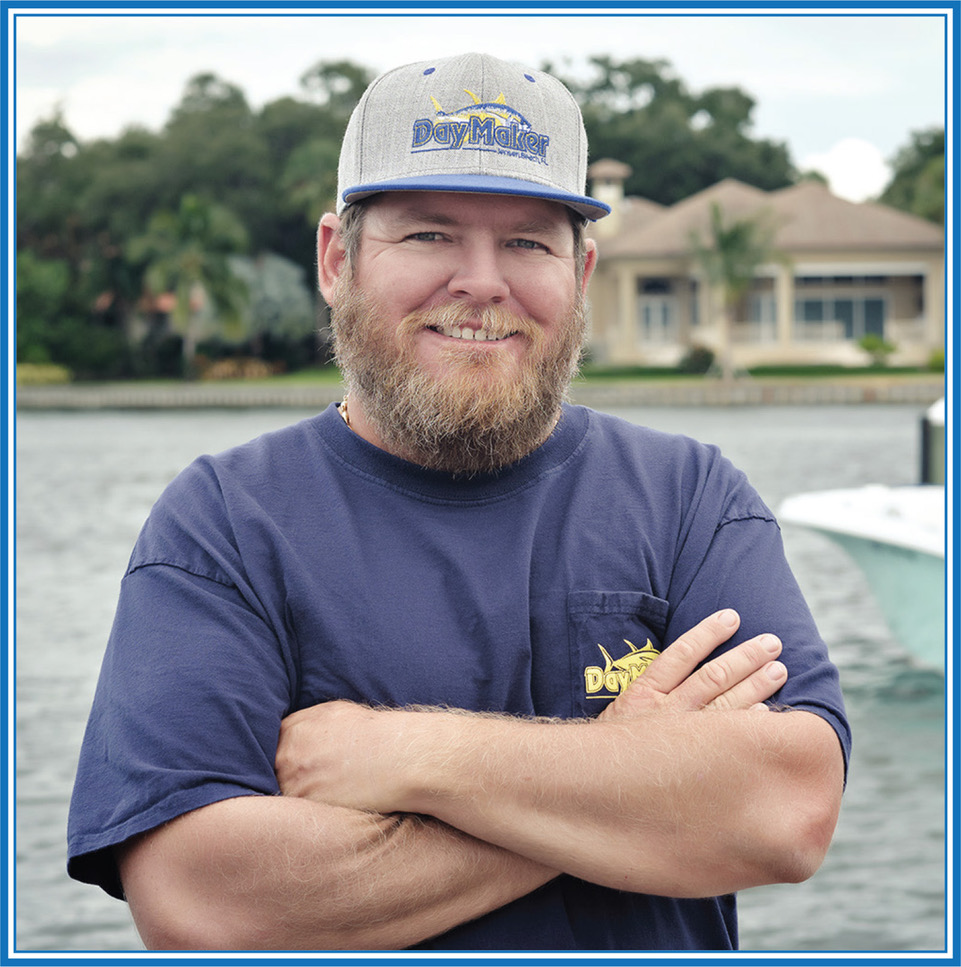 Patrick Price* always knew he would be a professional fisherman. Growing up in Jensen Beach, he spent his free time on the water, soaking up the essentials of the world of fishing and boating. Sure enough, by the age of 15, he was a professional crew member on charter fishing trips.

“I knew what I wanted to do and graduating early from Martin County High School was a jumpstart into that life,” Patrick notes. For years, his family received postcards from far-flung ports of call in the Caribbean, the mid-Atlantic, Central America and more.

He earned his captain’s license in 2005 and, in 2007, added a marriage license, with his wife Mandy. The birth of their son Zane in 2008 was a milestone that propelled him to anchor in his home port and launch his business, DayMaker Charters.

The name DayMaker echoes his mission to provide a day on the water you won’t soon forget. His primary vessel is a 34’ center console off-shore boat ideally suited to fishing charters for families, businesses, or even a bachelor party.

A native of Martin County, Patrick cares deeply about the needs of others. His son was in the same VPK class as Joey Swanson, who was diagnosed with brain cancer at a very young age. When Patrick learned of his tragic story, he thought, “this could be us”.

Patrick and Mandy committed themselves to fundraising for Team Go Joey Go! He donated fishing trips for raffle drawings to boost donations and encouraged other captains to do the same. Fortunately, the community’s loving support and the medical treatments have worked miracles on Joey; he celebrated his 12th birthday in October.

Patrick embodies the spirit of “investing for more“ on a regular basis. He annually donates 10 to 12 charter fishing trips. Supporting the military is a favorite cause. Often the excursions take veterans suffering from PTSD out on the water to enjoy a day fishing. They range in age from 30 to 90 and even though they may come aboard as strangers, over the course of the day they become teammates as they bait their lines and reel in their catches. “It’s the coolest thing to watch as their military mentality brings them together to conquer the task at hand,” Patrick says.

This September, Patrick watched and listened in disbelief as Hurricane Dorian pounded the Bahamas and made landfall on the Abaco Islands. “I’ve probably spent a quarter of my life in the Bahamas. It’s my home away from home,” Patrick reflected. “What happened has changed the country forever.”

The storm rekindled Patrick’s memories of his participation in the rescue efforts for Hurricane Matthew in 2016 in West End, Grand Bahama Island. He was a part of the leadership team that organized volunteers, sought and collected donations, and liaised with pilots who donated their services. Together with other volunteers, he collected essential supplies and flew 77 flights in one week out of the Stuart Jet Center to bring aid to residents affected by the storm.

As he monitored Dorian from the safety of his home, Patrick was formulating plans for relief efforts. “We were assembling a flotilla of boats to travel to Grand Cay with Dr. Michael Ferraro and his partners from Cleveland Clinic Martin Health with medical supplies to treat the injured. However, it became apparent there was nowhere to tie up and unload and the waters were filled with dangerous debris.”

By September 4, an air operation began with helicopters. Everything Patrick learned in 2016 came flooding back as he structured plans for this critical rescue mission. Planes were filled by teams of volunteers collecting donated supplies from a network of drop off locations and stored in hangar space donated by the Capen Family of the Stuart Jet Center.

Patrick documented plans, supplies needed and updated regularly on his Facebook page. Working alongside community partners and hundreds of volunteers, Patrick coordinated efforts, encouraged volunteers, and praised donors, reinforcing the importance and urgency of the relief effort 24/7. “It was a heart lifting experience,” he said.

Hundreds of volunteers and businesses contributed to the epic effort. “Everyone who was involved knows they were a part of an amazing effort that truly made a difference in the lives of thousands of desperate people.” In particular, Dr. Ferraro and his partners from Cleveland Clinic Martin Health, the Stuart Sailfish Club Foundation, Old Bahama Bay, the Puerto Rico Relief Flight, the Blue Marlin Cove and the Stuart Jet Center, were critical gears in the powerful relief movement.

The Mastroianni Family Foundation in Jupiter was an integral part of the effort from the beginning. By September 10, the foundation was able to secure the use of three DC-3 cargo planes to boost the final push. The DC-3 is an aviation legend with the ability to handle up to 7,500 pounds of cargo at one time.

At the end of the first phase of the relief effort on September 14, there were a total of 101 flights and 92 medical evacuations. Many of the patients were suffering from chronic health issues which couldn’t be treated in the Bahamas. In addition, the medical team supplied everyone with a month-long supply of medication.

Patrick now serves on the board of the Stuart Sailfish Club Foundation; they have pledged one year of continued support to help people rebuild their homes. They continue to fundraise with a goal of $100,000 to help more families.

The Stuart Sailfish Club Foundation has established the Marsh Harbor Taxi Project to help kick-start the economy. Because so many residents don’t have cars, they rely on taxi service as their daily transportation for work and errands. Unfortunately, many licensed taxi drivers’ cars were damaged in the hurricane and they have no resources to buy a new car. Therefore, providing vehicles would be a boost towards restoring normalcy to daily life for many. Using their strong relationships, the foundation has successfully petitioned the Bahamian government to abstain from imposing any taxes on the vehicles shipped by barge to the island.

If you are interested in learning more about their efforts and how you can help, you may contact Patrick Price at pat@daymakerfishing.com or 772-405-0091.

*Patrick Price is the younger brother of Craig Price.